- Listen to Ron's Interview with Roberta Israeloff and George McDermott -

A Former Teacher and Student Reflect on a Lifetime of Lessons

As we get older, one of the most important ingredients to healthy aging, experts say, is lifelong learning—a self-motivated pursuit of new ideas, skills and knowledge, particularly in the second half of life. But today, we’re going to take a very different spin on lifelong learning, as we talk with Roberta Israeloff and George McDermott, the co-authors of a fascinating book, “What Went Right: Lessons from Both Sides of the Teacher’s Desk.” Roberta, a lifelong writer, is  Director of the nonprofit Squire Family Foundation, dedicated to encouraging the teaching of philosophy at pre-college levels. And George, a writer and poet, is a former teacher who also had extensive editorial experience in several business and media fields over the course of his career. The two met in the late 1960s, when George was a young English teacher at Syosset High School on Long Island; Roberta was one of his students. “One of us was the teacher, one of us was the student. Mostly what we did was argue,” they recalled. But when they found each other on social media several years ago, they began a steady correspondence that became a book about their own “lifelong learning”—resulting in a provocative and vibrant exchange about their perspectives on public education over time, from inside and outside the classroom. Everything from their experiences as teachers, to the continuous debate over standardized testing, to the perennial questions about how education should prepare students to be “human,” to be discerning and productive citizens in a complex, increasingly divisive and unpredictable world. But it is also a story about what Roberta and George learned about themselves; what they remembered; how they reconnected; what went right (and wrong);  what changed over their lives; and what has remained the same—what endures. Today’s conversation is Part I of a unique 3-part series that will continue in July and August.

Roberta Israeloff has directed the Squire Family Foundation since its inception in 2007. The Foundation advocates for the inclusion of philosophy in elementary and secondary schools, and co-founded both PLATO and the National High School Ethics Bowl. She co-edited Philosophy and Education: Introducing Philosophy to Young People, and is on the editorial board of Precollege Philosophy and Public Practice. In her 35-year writing career, she has published numerous essays, short stories, book reviews, and books including, mostly recently, The Ethics Bowl Way: Answering Questions, Questioning Answers, and Creating Ethical Communities, co-edited with Karen Mizell.

George McDermott is a Philadelphia poet who lives in Florida (that’s not impossible, not even particularly uncommon). He’s also been an English teacher, a speechwriter, and a screenwriter (those are not mutually exclusive, not even especially different). His poetry has appeared or is forthcoming in such journals as Painted Bride Quarterly, Toho Journal, Passengers Journal, The Fourth River, Notre Dame Review, Coastal Shelf, and MacQueen’s Quinterly, as well as in the Philadelphia Inquirer, and his first collection—Pictures, Some of Them Moving—was published by Moonstone Press in 2018. He is also co-author—with Roberta Israeloff, who was a student in one of his high school English classes—of the nonfiction book What Went Right (Rowman & Littlefield 2017), a conversation about the successes and missteps of public education in the United States. 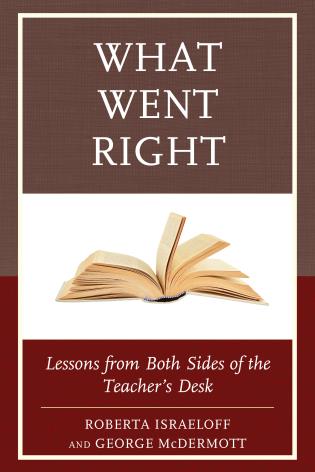