- Listen to Ron's Interview with Holly Gordon and Ward Hooper -

An Unparalleled Collaboration in Photography and Painting

They met through social media—as seniors, not millennials. Holly Gordon, a fine arts and documentary photographer, and Ward Hooper, a watercolor painter, were introduced by a writer and mutual friend, who noticed distinctive similarities in the work of the two artists, who shared a mutual affinity for color and light. When Holly met Ward, the two immediately connected as artists, and soon became close friends, meeting regularly and visiting local places that inspired their individual creativity. And the rest is history—still in the making.  In today’s episode, you’ll hear the remarkable stories of Holly and Ward, how their lives serendipitously intertwined, resulting in an unusual collaboration of exhibitions, presentations, projects and a book that combined their two works, “Parallel Perspectives: The Brush/Lens Collaboration.” Holly, a multi-faceted artist and long-time teacher, will describe her innovative use of technology to create photographs that look, at first glance, like paintings made by a brush, a process she calls “photo-liminalism.” She’ll talk about how she has joined a growing contemporary artistic and social movement known as “techspressionism,” an approach in which technology is utilized as a means to express emotional experience. Ward, for his part, will talk about the dramatic resurgence of  work through his collaboration with Holly—and his use of technology as a means of teaching and sharing art to new generations. Theirs is a story of resilience; the daily pursuit of creativity as a life-affirming force; and the steadfast advocacy for the arts as a means of engaging and inspiring humanity, no matter what our age. As Holly puts it simply: “Art is a wonder drug.”

Holly Gordon is an innovative fine art and documentary photographer. Her creative origins date back to photography in the 1960s and the aura and aromas of the traditional wet-darkroom. While most people who view her work think of it as painting, it is photography in transition. Technology is changing photography as we know it, and Holly’s art is part of that change. Photoliminalism, the name she ascribes to her creative process, solidified after more than 20 years of technological pioneering and exploration during the collaboration with Northport watercolorist Ward Hooper. As part of the 21st century international artistic and social movement, techspressionism, her art will be part of a groundbreaking exhibition at the Southampton Art Center this spring.

Their book, Parallel Perspectives: The Brush/Lens Collaboration, launched worldwide by Simon and Schuster in 2020, intersects with the lives and art of Arthur Dove and Helen Torr, early 20th century abstract artists, and has generated wide interest in the arts community and media. Since Holly is a member of the Long Island Authors Group, her book is on display and available for purchase at the Islip Arts Council Gallery in the Westfield South Shore Mall. In addition, the book is also available at Barnes & Noble in Bay Shore and at the Northport Historical Society, as well as on Amazon and other Internet venues.

Inspired by their collaboration, the Islip Arts Council invited Holly to curate the 2019 Open Call entitled “The Art of Collaboration,” which was so successful that she was invited to curate the first AARP-sponsored Open Call, Art at 50-Plus at the Islip Art Museum.  Subsequently, she curated the award-winning AARP-sponsored virtual exhibitions, “New Beginnings,” “Forever Young,” and most recently “2-Together.” She is represented by Denise Bibro Fine Art. Holly’s work has been exhibited widely and is in public and private collections that include NYU Langone, Stony Brook Hospital and Molloy College. Her art has appeared in The New York Times, Shutterbug Magazine, National Wildlife Magazine and Newsday.

Ward Hooper is a distinguished watercolor artist whose paintings have been widely exhibited and featured in Watercolor Artist Magazine. Ward’s close collaboration with Bay Shore artist Holly Gordon began with a serendipitous connection in 2014, and as the two artists discovered, evoked the remarkably similar collaboration of early 20th century artists Arthur Dove and Helen Torr, nearly 100 years earlier on Long Island’s North Shore. Ward and Holly’s six-year collaborative journey, “Parallel Perspectives: The Brush/Lens Collaboration,” was published in 2020, and is part of the lecture series in Geneva, New York in July 2022.

Ward was recently invited to teach watercolor painting through four videos as part of the Islip Arts Master Class program, available to the public. (See https://isliparts.org/school.html#master.) His numerous awards and honors include the Peacock Award for his watercolor paintings. After Ward graduated with a degree in graphic design from The New York City College of Technology, CUNY, and attended the Art Students League, his career included over 30 years as art director and award-winning design director for the J.C. Penney Company. He was also vice president of the design firm Coleman, Lipuma, Siegel and Morrill. Among the clients he served were Avon, Wrangler Jeans, Mattel, Revlon, Saks, Lever Brothers and Seagram & Sons. Ward has been on the teaching staff at the Art League of Long Island for 12 years. His watercolors are in private and corporate collections throughout the United States.

Their book can also be purchased on www.amazon.com. 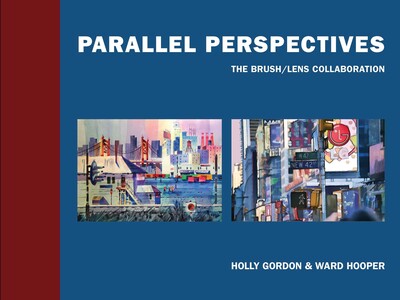 For more information about the Dove Block Project in Geneva, New York in July 2022, where Holly and Ward’s book, “Parallel Perspectives: The Brush/Lens Collaboration,”will be part of the lecture series, see https://www.thedoveblockproject.org/.

To find out more about Ward Hooper’s virtual watercolor painting classes, available to the public and presented in four videos as part of the Islip Arts Master Class program, see https://isliparts.org/school.html#master.