- Listen to Ron's Interview with Barbara Paskoff and Carol Pack -

A Pragmatic (and Light-Hearted) View of Turning Shades of Gray

As we get older, it’s important to find ways to embrace aging with grace, dignity and positivity. And yes, a little humor, too. In today’s episode, Barbara Paskoff and Carol Pack, two long-time friends and former award-winning journalists, offer a host of observations from the latest of their “Over-Sixty: Shades of Gray” series, the “Book of Lists.” The duo explains their latest venture—a collection of lists offering practical tips about appearance, relationships, entertainment, health (and a lot more)—but noting that as they entered the second half of life, they realized that time seems to fly really fast, “so getting to the point is more important than ever.” We don’t want to have to read everything that goes around to support aging, they joke—just give us a list of what to do.”  Thus, the book of lists was born. In their litany of lists, Barbara and Carol do not shy away from serious subjects, like loneliness, changing relationships and dementia. But they also integrate the lighter side of graying, reassuring us all that we’re not alone in the trials that come. And sometimes, they may offer up answers to questions you never knew you had.

Barbara Tuerkheimer Paskoff, a founding partner of Envision Productions, Inc., and a former broadcast journalist, has produced and written medical and public affairs programs since 1988 for PBS and cable stations. Her work has been broadcast throughout the United States. She has received four Emmy nominations, as well as awards from the Press Club of Long Island, New York State Broadcasters Association, Long Island Coalition for Fair Broadcasting, the Aurora Award, The Columbus International Film & Video Festival Award, The American Medical Association International Health and Medical Film Competition Award, and the New York Institute of Technology Alumni Recognition Award. Barbara is well known for her collaborative works with Carol Pack, including “Over Sixty Shades of Gray, A Journey Through Life’s Later Years” and most recently, “Over Sixty Shades of Gray: Book of Lists.” She has written, produced and directed medical education videos for pharmaceuticals, doctors, and patients. She has also served as Executive Vice President of the Society of Professional Journalists—Long Island Chapter She received her BS from Emerson College in Boston and her MA from New York Institute of Technology. Born in New York, she now resides on Long Island with her husband, Michael, and two fun-loving rescue dogs. She divides her time between writing, tennis and competitive dancing.

Carol Pack is an award-winning journalist, news anchor, college professor and former president of the Society for professional journalists—Long Island chapter. During her journalism career, she taught more than 1,000 graduate and undergraduate students at New York Institute of Technology how to get jobs as broadcast journalists. She also worked as a news writer for WNBC-TV and News 12 Long Island. She has received numerous awards from media organizations, including the Fair Media Council, New York State Broadcasters Association, the Society of Professional Journalists and the Press Club of Long Island. Carol now has a second career as both a non-fiction author and novelist. She is well known for her collaborative works with Carol Pack, including “Over Sixty Shades of Gray, A Journey Through Life’s Later Years” and most recently, “Over Sixty Shades of Gray: Book of Lists.” Her fiction work includes a young adult fantasy series known as the “Library of Illumination,” and a history fantasy series, “Evangeline’s Ghosts.” Carol received both her BA and MA from the New York Institute of Technology. A native New Yorker, she lives on Long Island with her husband, Andrew, and her picky parrot. 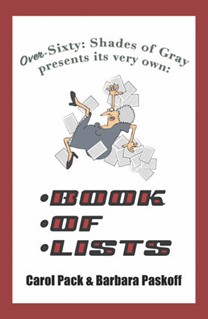