I know, I know. Who listens? Besides, we are shouting at each other. We are anxious, jittery, uncertain. We are more than merely disgruntled, we are angry, fearful.

Still, I will give it a go. Because I want to tell you something.

I want to tell you, America, to remain calm. Stop worrying so much about Those Other People.

I want us to stop, take a breath, you and I, and remind ourselves that we are the land of foreigners — former strangers and aliens turned friends and neighbors. We are the land of genii, native born and from every corner of the globe — impatient cranks and wide-eyed hobbyists — endlessly conjuring feats of artistic or technological prestidigitation. We are people always in process, with Better, Sleeker, Faster always just around the corner.

Only in America is tomorrow today.

Consider the journey of a Syrian refugee who escapes to America for a better life. He, a former student activist jailed in Beirut, obtains a PhD at the University of Wisconsin, then falls in love with a fellow student, a lovely American girl, winds up getting her pregnant, and, based on circumstances and family pressure, gives that child, a son, up for adoption.

The child grew up to become Steven Jobs.

I want to tell you, America, that here in New York’s metropolis one can hear over 700 languages spoken, and that we are the most powerful, dynamic, enterprising, and influential city in the entire world.

So I want us to sit down together, and over generously iced ice tea or lemonade with slices of summer lemons, close our eyes, and relax into the pulse of this real and potent thought: that we were not only okay in gentle Dayton, Ohio in 1910, and okay among Brooklyn’s tree-lined streets in 1949, four years after our greatest victories and during the birth of the boom, and still aces when we were full of erogenous promise and burgeoning cool on the Sunset Strip in 1960, so okay, daddy-o, over 50 years ago…

We are also okay today. I want to tell you, America, that we are still full of endless promise, still dynamic. Still great.

Above all, I want to offer reassurances from where I sit, an hour from Manhattan, that this is not simplistic idealism, it is an American truism: The More the Merrier. Specifically, I want to remind you — with a gesture that is half hug around the shoulder and half collar grab — that we are not losing America to anyone. So far, there has only been addition, not subtraction, and the changes in language and skin tone, foods and customs are plusses, not threats.

The Statue of Liberty is no sucker. Serenely wise, she looks upon the swarthy and shabbily attired, the poor and illiterate, the dispossessed and the unwanted, and still thinks one thing and one thing only. “Ah, future Americans.”

But before I blow the big, happy balloon too large, let me pause.

I am too creased and furrowed to be naïve. Besides, New York creates as many tough cynics as it does cosmopolitans. Everywhere — in all cities, small towns and nations — we remain a tribal species, wary of that Other. A certain innate wariness protected us when we roamed in small bands for our first several hundred thousand years. It is a habit we will not soon shake. “Halt. Who goes there? What do you want? Just passing through, need something to eat, or do you want to join the tribe? And, if you ask to join, be warned that there will be a period of testing. Really, we don’t know who you are.”

We have been wary, tribal homo sapiens for nearly 200,000 years, and Americans for a mere 240 years. Our generous national ethos and vast, open borders continue to ask a lot of the cagey critter that resides within each of us. With one hand slowly outstretched, we are willing to shake your hand, smile and say, “Howdy.” But do forgive us the Eastwood-like squint of our left eye.

The world I grew up in was a Good Humor swirl of Irish, Italian, and Jewish. The rest of our gang was largely Polish or Hungarian, Puerto Rican or Dominican, Greek or Armenian. Sure, there were plenty of Protestants, but we non-WASPs felt surging, preeminent. They were the bedrock, we were the rising tide. There were some Smiths and Joneses, but they were the minority in these parts.

Also, to be honest, the largest minorities today were also a real small minority where I was raised; having left Brooklyn for Nassau County, Long Island when I was 3. Black Americans and most people of Hispanic heritage were likely to be in small clusters. They were more often visitors than neighbors. But when I moved to California at 18 for college, I moved into a different world where countless persons of Mexican and Central American heritage lived among the coastal Caucasians and, frankly, I never really thought twice about it. It was just the prevailing mix of humanity and ethnicity on the southern West Coast.

But that was over 40 years ago, and the Hispanic population in the U.S. was under 10 million people, less than 5% of the total. Today it is over 55 million, an increase of over 500%! Very soon, people of non-white Hispanic heritage are going to be 20% of the Us in the USA. Thus, we see the national case of the jitters, and worse, among a large percentage of the gringo population. You may know some African American friends who are also not very happy about this new mix.

Then again, there are far more Asians than there were only 20 or 30 years ago. This century, Asian immigrants have outpaced Latin American and Mexican immigrants (there are actually a million fewer Mexicans in the U.S. over the seven years between 2007 and 2014). And yes, there are more Muslims, but not by much. Their numbers have increased, sometimes dramatically, in Europe over the last few decades. The Muslim population in the U.S. remains about 1% (compare that to 7.5% in France). Besides, many of these U.S. Muslims are Black Muslims converts, and the rest are, in the main, well integrated and happy to be here.

Still, we are nervous.

The complexion of America is changing. Rightly or wrongly, the white tribe feels under siege. But the places where European heritage citizens are most concerned tend to be in the South and Midwest, especially in rural places, where they haven’t grown up with too many people from Honduras, India, China, Korea, Turkey, Russia, Puerto Rico, Egypt, or Ethiopia.

Raised in the middle of the country rather than here, maybe I’d be nervous, too. Who can say? But here’s what I say, having lived nearly all my life in New York (with seven years in California and a year overseas): Those Other People can be pretty great.

A greater variety of foods and spices? Of course. Colorful clothing, customs and music that seep into the American street or wind up on our backs? Sure. More often than not, very hard working people who add to the economy in positive, unexpected ways? Yes, it’s long documented.

What does America excel at other than movies, amusement parks, baseball, basketball, football, tech, innovation, and wealth-making? We excel at making Americans — industrious, proud, quickly patriotic, freedom-seeking new citizens. We always have. It’s the open secret of our national secret sauce.

So I started out by requesting calm. But at this point I have already changed my mind. When it comes to immigration, and Those Other People it brings here, I think we might choose, after all this time, to be very, very excited. And, of course, I’m talking about the good kind of excited.

But you knew that, right? 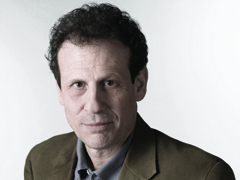 Ken Taub is a copywriter, strategic marketing advisor, author, online journalist, and associate editor of RoelResources.com. He lives on the North Shore of Long Island with his wife and son.